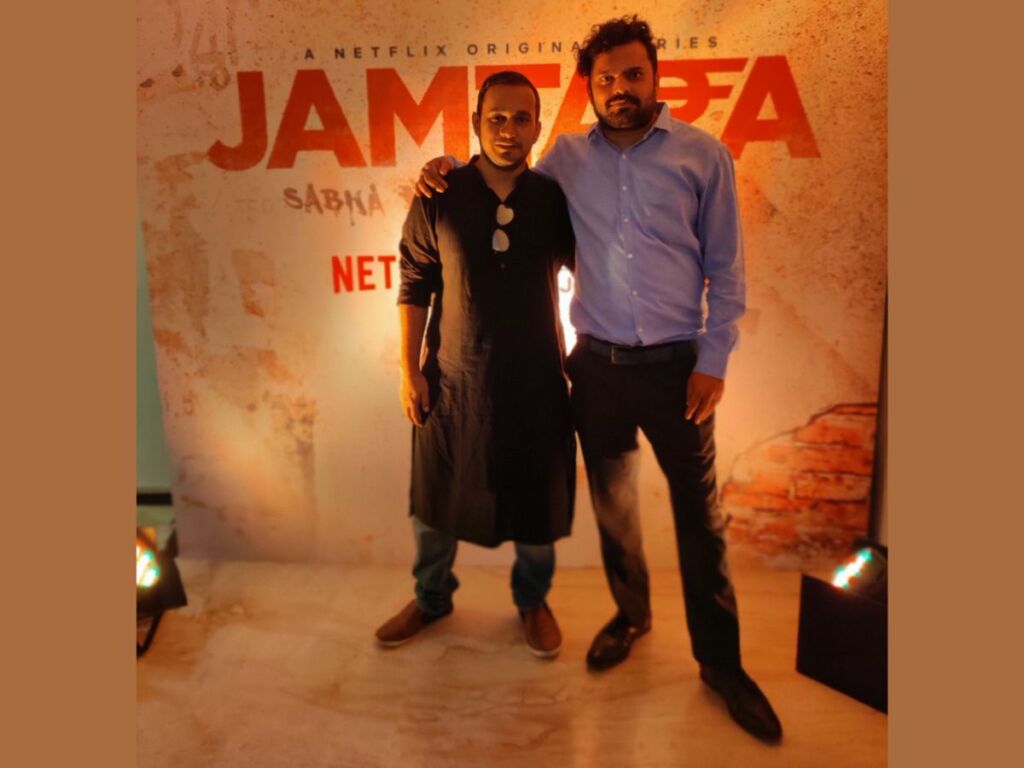 Casting for a film or a show includes a long process. While many believe it is easy to scout for the right talent, it requires a thorough process before the artist comes on board for a film, series or show. Bringing new artists to the forefront, Vikas Pal and Vibhu Gupta have given many deserving actors a platform to showcase their talent.

The duo is responsible for a stellar casting in the popular series ‘Jamtara’. Vikas and Vibhu did casting for both seasons of the show. While the first season of Jamtara was spectacular, the second season started streaming on September 23, 2022. Made predominantly by young talents, the web series gave recognition to many new-age artists. Thanks to Vikas Pal and Vibhu Gupta that they got to discover talents from backward communities of India.

The two prolific casting directors do not come from a grandeur background. Hence, they scouted for talents outside the industry and the rest is history. The series turned out to be a massive hit among the audience. Having worked for an array of advertisements, the duo has done casting for web series like ‘Yeh Meri Family’ and ‘Thinkistan’ Season 1 and 2.

Sharing how ‘Jamtara’ happened, Vibhu Gupta said, “We got introduced to producer Manish Trehan, director Soumendhra Padhi and Viacom 18 Studios in June 2018 through my friend Trishant Srivastava who knew me during the theatre days in Delhi. When we heard the script, we were sure about the colossal success. We focused only on ‘Jamtara’ for a few months, and I am glad that the director and producers showed immense faith in us.”

Furthermore, he stated that they wanted to keep the cast as raw as possible for which they auditioned a lot of candidates from Mumbai, Bihar, Jharkhand and Uttar Pradesh. Putting in their best effort, ‘Jamtara’ brought talents from outside the industry. Through their work, Vikas and Vibhu are ensuring that artists from outside the industry get an opportunity to prove their acting potential.

Vikas Pal and Vibhu Gupta’s upcoming works are lined up with major OTT giants which will be announced soon. No wonder, they have succeeded in starting a trend of bringing artists from backward classes into the limelight. Interestingly, for one of their upcoming works, they cast some actors and non-actors from Mumbai’s slum area Dharavi after conducting an extensive workshop.

Proving their credibility, the duo has made a place in the industry with their hard work. “People from backward classes and rural areas are marginalized by society. It is perhaps one of the reasons why these groups are still struggling for their rights today. We intend to bridge the gap and churn out the best talents from the country”, Vikas concluded.

The post Vikas Pal and Vibhu Gupta reveal how Jamtara happened and the trend of casting talents from outside the industry appeared first on Republic News Today.

Sudhakar Group is expanding to set up a mega plastic piping plant in Ujjain to serve North, West, and Central Indian markets

Read Time:1 Minute, 32 Second Hyderabad (Telangana) [India], August 23: Sudhakar Group, a leading PVC Pipes and Fittings manufacturer in South India, has expanded its horizons by laying the foundation stone for the mega plant to manufacture all types of plastic piping systems for agriculture, water supply, and construction segments in an area of 22 […]

Mumbai, Sep 21: You cannot serve God without serving humanity, and the importance of this service was never understood more clearly before as much as it has been during Covid-19. People throughout the world are facing difficult times due to the pandemic since it started in 2020. But, there are also people who have rendered […]

Samhita recently conducted a study of SSE’s in 7 countries to evaluate its importance in India  October 21: The Securities and Exchange Board of India approved the creation of the ‘Social Stock Exchange’, which is seen as a game-changer in the social impact segment. These are regulated platforms that bring together social organisations, donors, and […]