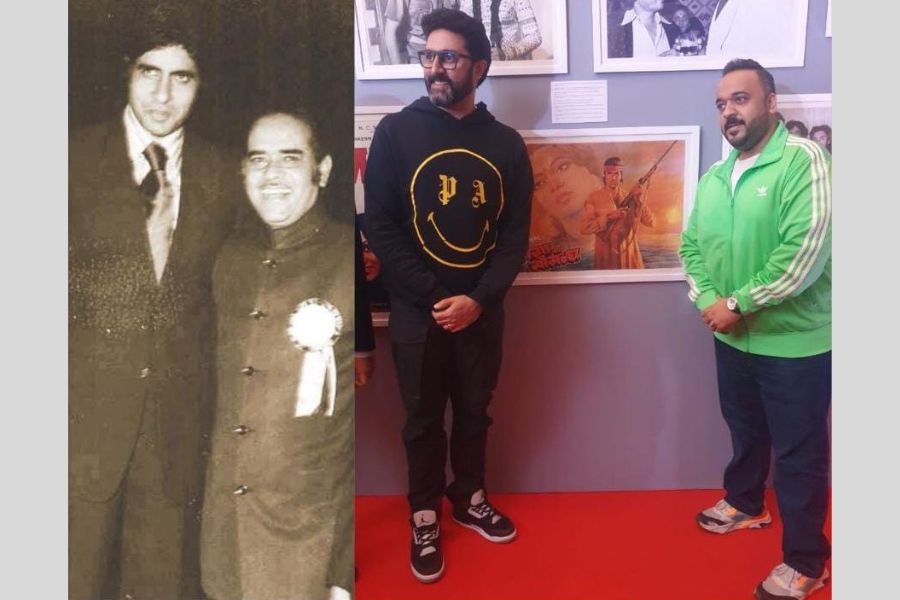 October 10: Film and music producer Ali Akbar sultan met Abhishek Bachchan to celebrate Big B’s birthday at a four-day event named ‘Bachchan Back To The Beginning’ at PVR Juhu. The festival is organized to celebrate the biggest icon of Indian cinema, Amitabh Bachchan’s 80th birthday, by the Film Heritage Foundation and PVR.

The event took place on 172 stages and 30 screens across 22 theatres around India and will put together a selection of 11 movies. Ali Akbar was feeling grateful, reminiscing about his father, Sultan Ahmed’s work together with Amitabh Bachchan. Remembering the era of these evergreen movies, he quoted, “I always feel inspired when I watch movies done by Amit’s uncle. The unique display of emotions and sentiments along with the perfect script and direction is always motivational.”

Both Ali Akbar and Abhishek Bachchan, the two generations, reinvigorated and took forward the bond at the event, where they both congratulated each other for the amazing Bollywood movies their fathers made together. Sharing the moment and famous dialogue – “Chacha, tum theek kehte the.. Zulm karne wala bhi papi, Zulm sehne wala bhi papi.. Maine Zulm sehna chodh dia chacha..” from superhit blockbuster movie ‘Ganga ki saugand’ with casts Amitabh Bachchan, Rekha, Amjad khan and Pran they felt nostalgic and more connected.

The FHF, through this one-of-a-kind festival in association with PVR, is showcasing a grand opportunity for the fans to discover more about the living legend. Along with the series of movies, fans also see some of the rare footage of behind-the-scenes and pictures from the star’s life and career. The list of movies screening from 8th to 11th October will be – Don, Kabhi Kabhie, Chupke Chupke, Kaala Patthar, Satte Pe Satta, Abhiman, Amar Akbar Anthon, Deewar, Kaalia, and Namak Halaal.

Seeing such an initiative, Ali Akbar added, “It has become truly a great event for all the fans of Bachchan! Also, the exhibition by Ausaja is priceless. The highlight is Shahenshah’s original jacket! #AB80 was good to see our film #GKS #gangakisaugand. I am feeling very happy to be able to attend this 4-day retrospective event. It is truly a perfect gift for Amit’s uncle and for the entire Bollywood fans to be able to witness such amazing films over the big screen again.”

The festival takes place in different corners of the nation, including Mumbai, Delhi, Kolkata, Bengaluru, Hyderabad, Ahmedabad, Surat, Baroda, Raipur, Kanpur, Kolhapur, Indore, and Prayagraj. All the movies are the best movies of the 1970s and 1980s that are still popular among the generation. Even after Big B’s 53 golden years in the Bollywood industry, he still is the busiest celebrity. Ali Akbar Ahmed also added, “I, along with my brother Ali Abbas Ahmed and the entire team of Sultan productions, wish Amit uncle A very happy birthday” and also congratulated him for his recently launched movie ‘Goodbye’ released on 7th October.

The post Ali Akbar along with Abhishek Bachchan celebrated and congratulated each other for the successful journey of their fathers together appeared first on Republic News Today.

Online Fantasy Sports – a Boom in the Internet Gaming World

July 21: Games have always been a source of entertainment for every generation whether it is a child or an adult. In the era of smartphones and the internet, the online gaming world is developing faster than expected. There are many forms evolved in this world like Online Fantasy Sports (OFS), e-Sports, Online Skill-based Casual […]

Read Time:1 Minute, 16 Second Directed by Sai Kabir, ‘Holy Cow’ is a satirical drama that sheds light on one of the most relevant issues plaguing society today and stars Sanjay Mishra in the protagonist role. In fact, it holds a mirror to society and questions inherent prejudices. Mumbai, August 25: Given that the film’s […]