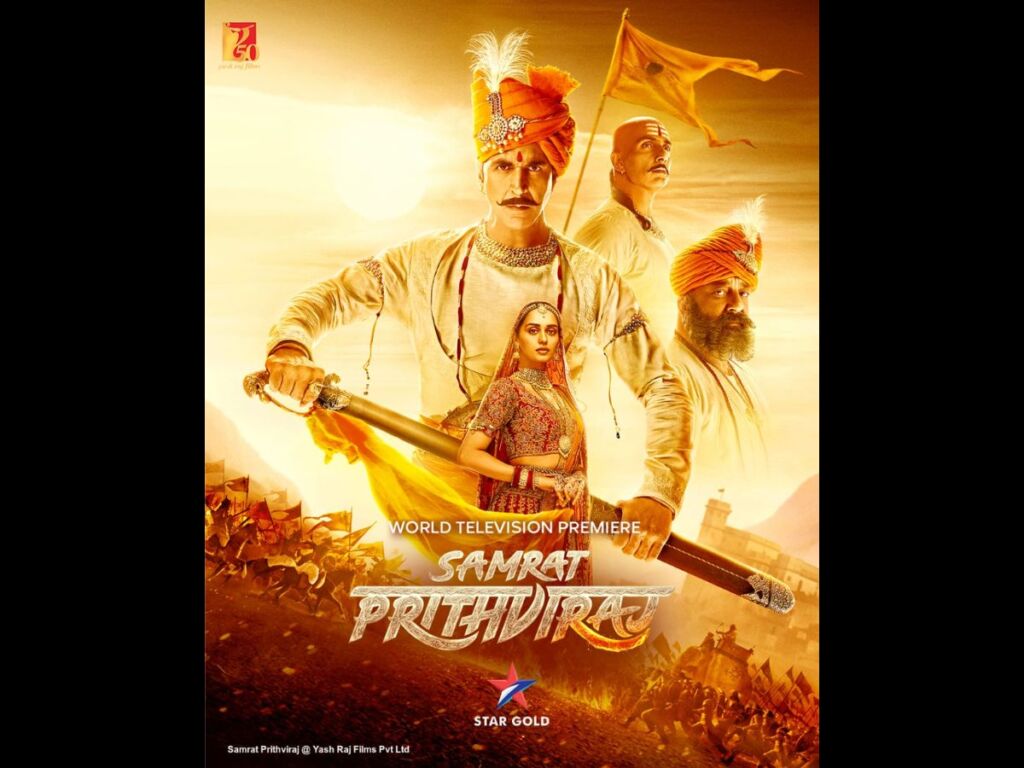 Mumbai, October 1: Samrat Prithviraj is Yash Raj Films’s first historical movie inspired by the epic Prithviraj Raso, on the life of the heroic ruler Samrat Prithviraj Chauhan and is a glimpse into India in 12th century. Starring Akshay Kumar, Manushi Chhillar, Sanjay Dutt and Sonu Sood in lead roles, Samrat Prithviraj will have its world television premiere on Star Gold on Oct 1, at 8 PM IST.

Akshay Kumar, in the role as the mighty king Samrat Prithviraj, is proud to bring this story on the television. “I felt proud to be a part of a film that was about a legendary warrior king and his empire. But I was taken aback by how little we know about Samrat Prithviraj. The more I heard from my director, the more I realised I have to surrender to his vision,” says Akshay, about the film which will get its world television premiere on 1st October, 8 PM on Star Gold.

The director, Dr. Chandraprakash Dwivedi says, “Samrat Prithviraj was my dream project. It’s a script that I nurtured for a long time because of the extensive research that was needed. I read many books on his life to ensure that we are doing justice to Samrat Prithviraj Chauhan in our film. Today, I’m deeply satisfied as a writer and film-maker. There is no Samrat like Prithviraj and I hope audiences will enjoy watching the world television premiere on 1st October, 8.00pm on Star Gold”.

The film is not just about valour, but romance too. Manushi Chhillar, who was crowned Miss World in 2017, stars as the Samrat’s wife Princess Sanyogita. “When an opportunity like this comes your way, there is no looking back. Everyone around me, including my family was thrilled that I was getting a chance to play someone as legendary as Princess Sanyogita. I am hoping audiences will love the film and Princess Sanyogita’s character when they watch the world television premiere on 1st Oct, 8 PM on Star Gold.” she notes.

Rini Chandra and Sonal Gaur Tiwari Sets the dance floor on fire with the Garba anthem, Ek Patan Sherni, along with Honey Trouper

Read Time:1 Minute, 57 Second September 29: This Navratri, celebrate with the latest song of Trouper Records and Virtual Planet, ‘Ek Patan Sherni‘. Sung by Rini Chandra, featuring Sonal Gaur and Jitendra Rana, the song was released on 26th Sept 2022, and just in a day, it already has a lot of views.  The latest […]

Introduction to FTV At Fashion TV, we give budding fashionistas the platform to showcase their inner flair and come into their own. We unite them with their love for fashion, panache and connect with their inner self. Now is the time when the aspirants can prove themselves to the world and most importantly, to themselves. […]