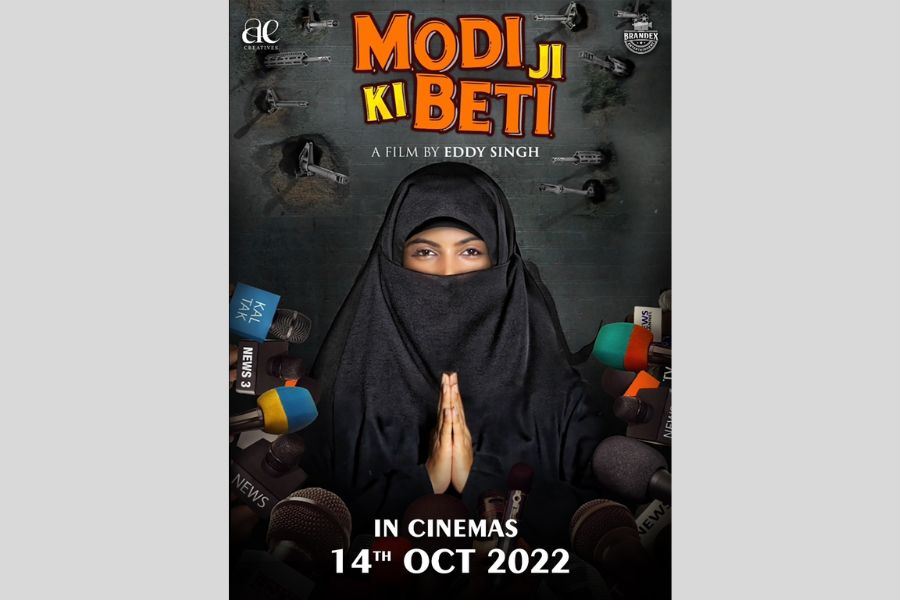 Mumbai, September 02, 2022: Brandex Entertainment &AE Creatives has announced the launch of a light-hearted movie Modi Ji Ki Beti – a subtle comedy satire created within the backdrop of the love-hate relationship between India and Pakistan. This is the directorial feature film debut of the astute and result-oriented ad-filmmaker Eddy Singh and stars Avani Modi, Pitobash, Vikram Kochar, Tarun Khanna, and Kavita Ghai.

Modi Ji Ki Beti is inspired and based on a true-life incident that happened with the actress Avani Modi. Produced under the flagship banner of AE Creatives&Brandex Entertainment, the movie is a hilarious comedy and satire on terrorism and Jehad. The movie is set within the canvas of terrorism and the relationship between India and Pakistan and uses comic nuances to satirically narrate the misunderstood concepts of religion and patriotism.

The lead actors of the movie are Avani Modi who made her Bollywood debut with Madhur Bhandarkar’s Calendar Girls, Pitobash who has over 12 years of experience in Bollywood, Hollywood, and European cinema, Vikram Kochar who has worked in various web series, Tarun Khanna who has worked extensively in the Indian Television Industry, and Kavita Ghai who is known for her memorable roles in movies and television series. Avani Modi is also the writer of the movie.The promotion and distribution of the movie will be managed by Brandex Media Network Private Limited. The company has promoted over 400 movies in various languages including Hindi, Punjabi, and Marathi.

Music will be released by ‘Brandex Music’, a music and distribution firm owned by Brandex Media Network Private Limited and Brandex India is handling the marketing and social media.

MODI JI KI BETI is a complete family entertainer and makes a perfect timely entry around the festive season. The release of the movie in theatres across the country is bound to entertain and bring laughter to cinemagoers said Arpit Garg, Founder & Managing Director, Brandex Media Network Private Limited.

The post Modi Ji Ki Beti – a laugh-riot and complete family entertainer film by Brandex Entertainment and AE Creatives to be released on October 14 first appeared on Primex News Network.

The post Modi Ji Ki Beti – a laugh-riot and complete family entertainer film by Brandex Entertainment and AE Creatives to be released on October 14 appeared first on Republic News Today.

October 20: When the first Bhojpuri talkie film, “Ganga Maiyya Tohe Piyari Chadhaibo ” was launched in 1963, nobody knew that the industry would become a mammoth 2000 Cr industry. Popularly known as “Bhojiwood” has an array of A-listers like Ravi Kishan, Manoj Tiwari etc. Who took the industry popularity and reach to new levels. But somewhere, people who were […]

Read Time:2 Minute, 51 Second New Delhi (India), January 31: After the phenomenal success of his new song ‘Guzarta Hai’ which has crossed 1 million views on YouTube in less than a week, Prateek Gandhi is back with another chart-buster song. The talented musician, who is popular as the music machine for constantly releasing fresh music […]

A New Sensational Duo in the Music Industry “Ashanx”

RitikYoutuber is a Youtuber and Instagram Influencer, real name is Ritik Kumar