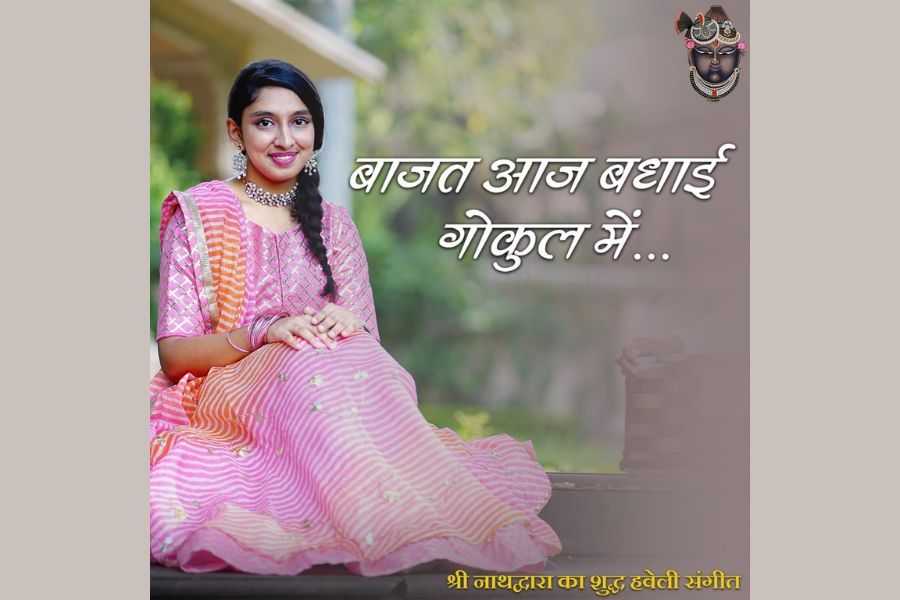 Surat (Gujarat) [India], August 19: Vanya bhatt, a budding singer from Surat, presenting to you, on the auspicious occasion of Janmashtami, “Baajat aaj bhadhai gokul mein”, a bhajan celebrating the incarnation of Lord Krishna, from an upcoming album full of devotional bhajans for Shrinathji. In pushtimarg, they come from a form of music called “Haveli sangeet” (Music of the Holy Temple) of a city called Nathdwara in Rajasthan. It’s a breathtakingly beautiful but unfortunately an endangered form of music which Vanya Bhatt wished to redeem, in a way.

All of the bhajans have deep literary connections and references to nature, sound, feelings, morals which make us feel one with the world and ourselves, essentially. Affection, Nature, Dedication, Worthiness and Celebration are according to Vanya, the 5 themes that move along the bhajans one through five.

After multiple learning and practice sessions with the gurus and the pandits themselves, who sing and play these bhajans in the temple 8 times a day, here are these gems for you. Hope they give you peace and harmony.

Link to the song: https://youtu.be/s2KhcZB96VI

Read Time:2 Minute, 6 Second Mumbai (Maharashtra) [India], July 2: Music has been part of Indian culture and has been one of the soul impacting & nourishing forms that has given some of the finest creations with symphony. Inspired by the wonderful renditions and looking at the opportunity to contribute more to this space V- Chord […]

Read Time:3 Minute, 17 Second Film Merit Animal praised at International Film Festival Mumbai, April 16: After travelling all around the world and making its appearance globally, Merit Animal is all set to release in India. Produced by Pradeep Deshmukh and Reena Jadhav under the banner of Rajrajeshwar Films & Mahalaxmi Cine vision and directed […]

February 12: Mohamed Magdy Soliman, known as Rated is one the biggest, most popular, and most achieving players in the entire Middle East & North African region, specialized in League Of Legends. He has been playing professional since 2016, and has won multiple national, regional competitions such as Intel Arabian Cup (The biggest Esports tournament […]