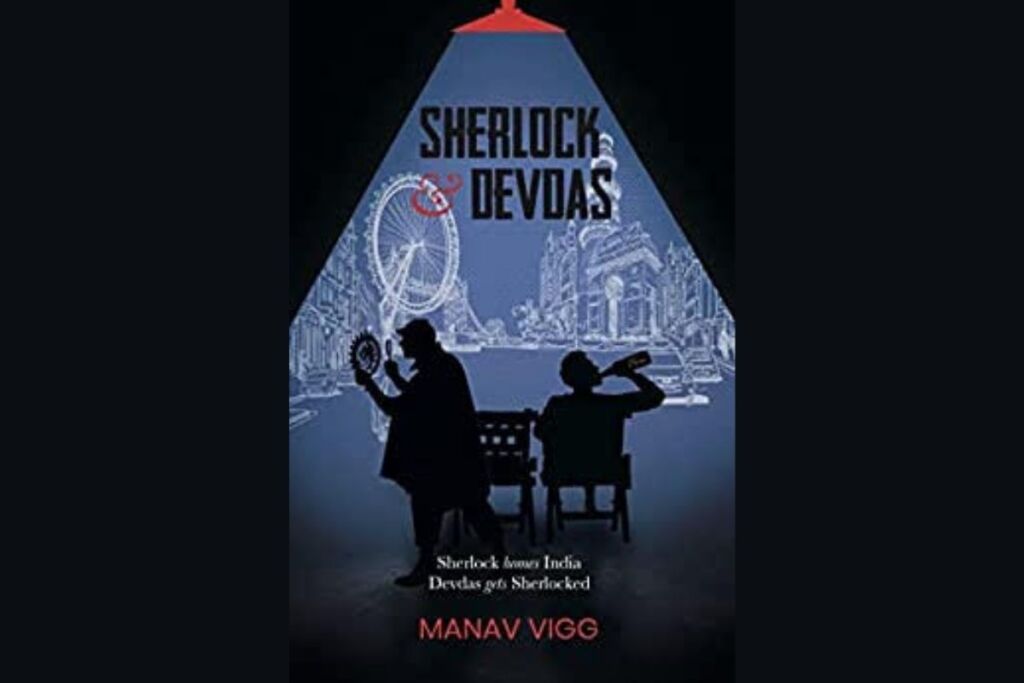 July 8: Manav Vigg has outdone himself with his latest book – Sherlock and Devdas: Sherlock homes India. Devdas gets Sherlocked. This book has a unique voice that fleshes out both characters for what we love them – suspense and melancholy, respectively.

Characters – The masters who drove the book forward

Sherlock Holmes and Devdas are renowned characters that we know and love. Each one of them has a distinct voice in this novel, and a lot of references for their original stories are thrown around. For example, Sherlock often says ‘Elementary, Devdas, Elementary’ – creating an essence of reminiscence for readers.

The introduction of Dr Watson for a brief chapter was interesting to see as yet another beloved character made an appearance and engaged in quirky dialogue. It was refreshing to see the two worlds colliding and the outcome being something totally unexpected!

The same goes for Devdas, who is depressed after the love of his life, Paro leaves him for someone else. The lovers are separated despite their bond still being intact. It is beautiful how the beauty of their bond is depicted from their early days of childhood. The internal conflicts of both Paro and Devdas are depicted beautifully on several occasions, which adds life to the story. Furthermore, there are some scenes with Chandni, who is a close friend of Devdas – that is, if we use the word ‘friend’ very loosely!

Rewriting the stars – so to speak.

One notable aspect was how at times, the book deviated from the characters’ original personalities. Sherlock Holmes has always been admired as being someone who never turns to anyone for help and solves mysteries by visiting his ‘mind palace’. But in this book, he is given a very human form and is seen to be vulnerable on many occasions.

He is trying to crack his first big case and is even depicted as having financial issues at times! While this retelling might be off-putting for some readers, it is a refreshing take even for die-hard Sherlock Holmes fans! It was a fresh perspective and had a lot of scope in future sequels.

An intriguing aspect is how the duo came together during various parts of the novel and used their intellects to find solutions. Be it the hunt for the Sherpa, the quest to defeat Devdas’s addiction to alcohol, or solving the mystery at large – it was interesting to see the contrasting characters set aside their differences and join hands.

Manav Vigg has indicated his witty nature with the writing in this novel. It is elegant and poetic at times while turning sarcastic and humorous at other times. It is fun to see the characters communicating with each other and solving the mystery in their own ways. Add in Meenal, C.L., Mrs Hudson, and Bhatia to the mix, and you get the most eccentric cast in a novel! Even the antagonists were fleshed out, and readers keep guessing till the very end who the perpetrator could be.

Devdas has a profound interest and love for antiques and artifacts. This helps him support Sherlock during tricky situations. Similarly, Sherlock has contacts in the police department and has access to scientific equipment to conduct tests and prove the evidence gathered.

The pacing and twists

The book is paced quite well, and the chapters are very short. This was a bonus, as readers always feel that they are getting through the book faster if the chapters are short. Not to mention the plethora of edge-of-your-seat moments in the book wherein the author revealed various plot twists and action sequences.

The twists and turns were placed well throughout the book, and the author takes the readers on a comprehensive journey to solve the case. It almost feels like readers are putting the pieces together along with Sherlock and Devdas. This writing style and pacing really stood out while flipping through the pages quickly to find out if the assumptions were true.

Sherlock and Devdas is a refreshing new read from a brand-new perspective we have never seen before. Apart from having scenes depicting love, sorrow, loss, comedy, and depression, the story has a spell-binding mystery at its core. The mystery at the heart of the story is what ties the whole package together!

The book is highly recommended to anyone who loves Sherlock Holmes and detective stories. Readers will love seeing their favourite character in this new avatar! Fans of Devdas and Paro should also check out this novel, as their love and banter are beautifully described!

The twist is intriguing and leaves scope for a second novel in the series – the cliffhanger was unexpected! Mind you. There are some romantic scenes in the novel and very mild use of swear words. If this turns readers off to let young readers check out the book, then to each one their own! On the whole, the book is highly recommended.

The post Booknerds reviews Sherlock and Devdas – An unlikely pairing that spins a tapestry of suspense appeared first on Republic News Today.

God Gift x Rishabh Pant – a new relationship with God and a twist in the tale of Hey Bhagwan!

January 25: A glowing Skin complexion and shiny hair have always been the ultimate requisites of beauty. Arshi skin and hair Group of clinics, one of the leading chains of skin & hair clinics in Hyderabad City, has helped thousands of patients discover their true beauty in the short span of its existence.  Established in […]

“Sky is the limit for me”, says Pooja Nangia as she recalls her journey from Haryana to New York Film Academy with Khushi Kapoor